Future of Wind Power in Pakistan

Pakistan is a country blessed with the natural resources in abundance, but ineffective use of the available resources denied Pakistan of progress it deserved in social, economic and industrial sectors.

Energy is the basic requirement for industrial growth. Due to the developments made in various sectors of the country, the overall energy requirement has increased to a large extent but the power generation capacity wasn’t improved adequately to meet the requirement. This has resulted in widening of demand – supply gap in energy sector. Power is mainly generated through thermal power plants, which constitute almost 68% of total power generation capacity. Due to this fact, the energy sector has become dependent over imported fossil fuels. This has added to the energy insecurity of the country as fossil fuel reserves are depleting and there have been an international trend of price hike of these energy resources. The situation has led to explore the possibility of power generation through alternate energy resources. Wind power, an alternative to fossil fuels, is plentiful, renewable, clean and produces no greenhouse gas emissions during operation. The advantage of Wind Energy is relatively low capital cost involved, short gestation period required to commission wind power systems and superior environmental benefits with reduced emission of pollutants. Operational costs of wind power are quite low as compared to the other resources. 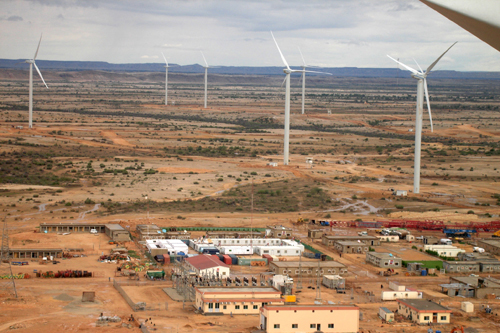 A remarkable growth in the wind power has been observed throughout the world in recent years due technological advancement in field of wind power which resulted in the increase in the efficiency and output power of wind turbines. World wind generation capacity more than quadrupled between 2000 and 2006, doubling about every three years. Worldwide there are now over two hundred thousand wind turbines operating, with a total capacity of 282,482 MW. The European Union alone passed some 100,000 MW nameplate capacity, while the United States surpassed 50,000 MW in August 2012 and China passed 50,000 MW the same month.

Pakistan has been gifted with an immense wind resource especially in the coastal areas of Sindh and Baluchistan. The Gharo-Keti Bandar Wind Corridor spreading 60 km along the coastline of Sindh province and more than 170 km deep towards the land alone has a potential to generate more than 60,000 MW of electricity. The wind power generation potential of coastal region of Baluchistan is yet to be evaluated.

Two wind farms of 50MW each have been commissioned recently and four wind power plants of 200MW cumulative capacity are expected to dispatch power to national gird in 2014. The ongoing progress in the field of wind power is behind the planned target. To achieve the desired results and sustainable future progress in wind energy sector following suggestions are put forth.

The wind monitoring stations or wind masts should be set-up in the coastal areas of Baluchistan (along coastal Highway from Karachi to Gawadar) in order to collect wind data that can be utilized for development of wind profile of the area. Feasibility of wind power generation should be prepared and shared with the interested parties.

There is need of improvement in the coordination among the institutes involved for efficient and timely completion of the projects.

Lack of infrastructure (roads, utilities, security etc.) in the areas of wind power is also a hindrance in the development of the sector. The area selected for wind farms should be connected through road networks which are necessary for transportation of equipment and machinery to the plant site. Effective security should be provided to staff working as wind farms are located in remote areas.

Government should also encourage the manufacturing of the wind power equipment in Pakistan. In this regard facilities and incentives should be provided to the investors. Two components of wind turbine which can be manufactured locally are wind turbine tower and the turbine blades. By local manufacturing there will be saving of time and freight costs as both of these component require special logistics arrangements. It will also generate the employment opportunities for the local population. 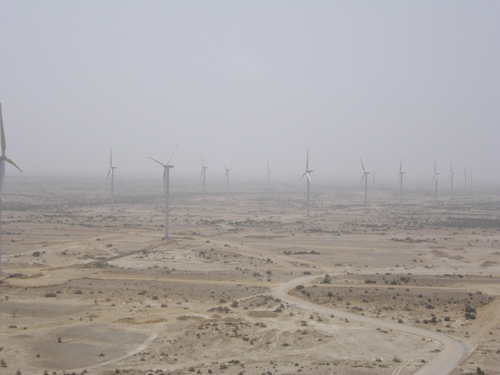 It is vital that the general public should be properly educated for the benefits of wind energy through awareness campaigns. Media can also be used as tool to reach masses. People should be informed that wind power projects shall create employment in the area and contribute to the prosperity of the population. The local manpower shall be trained to operate and maintain the power plant.

As part of corporate social responsibility a fund should be established by the Wind IPPs for the betterment of the local community. This may include the improvement of education and health infrastructure in the locality.

Last but not the least a feasibility study should be conducted for the installation of wind turbines on smaller scale. Currently the minimum capacity of wind farm is 50MW. This capacity requires higher capital investment and involves international lenders which results in high tariff. If small scale wind farms are allowed and facilitated, then local investors will also contribute in development of this sector. Community based small wind farms should also be facilitated and supported.

It is concluded that wind energy presents a considerable opportunity for us to obtain significant part of the future energy needs from this sustainable source. If the opportunity is to be maximized, then we must ensure that the developments are taken forward with care and sensitivity so that both public and political support is maintained. It would facilitate the development of this technology in local industry which will create more employment opportunities and economical activities in remote areas. Wind farms will help reducing environmental consequences due to reduction in dependency over fossil fuels for power generation.