HomePublicationsOpinion PieceOpinion Piece on Conflict or Cooperation: The Tough Libyan Puzzle for Turkey and Egypt

Opinion Piece on Conflict or Cooperation: The Tough Libyan Puzzle for Turkey and Egypt

The warning by the Egyptian President, Abdel Fattah el-Sissi, to the United Nations-backed Libyan Government of National Accord (GNA) that any attack on the strategic city of Sirte or the inland Jufra airbase would amount to crossing the ‘red line’ for Egypt, has ignited a new debate about the future of Libya. Abdel Fattah el-Sissi said that the Egyptian military would intervene into neighbouring Libya for the protection of its western borders if required so. Libya’s GNA, majorly backed militarily by Turkey, labelled the statement by the Egyptian president as ‘declaration of war.’ This warning adds fuel to the fire in the war-torn, oil-exporting country of North Africa where proxies of the regional and extra-regional powers have been playing havoc with peace and stability since 2011. 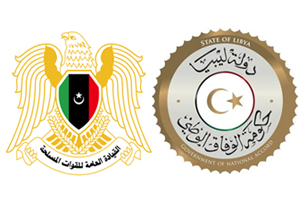 LNA & GNA Symbols, via wikipedia.org Currently, Libya is majorly divided into two factions: Khalifa Haftar’s Libyan National Army (LNA) and UN-recognized Government of the National Accord (GNA). Both of these groups are widely supported by several regional and extra-regional powers. In April 2019, Gen. Khalifa Haftar’s LNA launched an offensive to take control of the Libyan capital, Tripoli, but failed due to coordinated retaliation by the forces of the internationally-backed GNA with Turkish support. According to UNHCR, since April 2019, over 120,000 Libyan people have been displaced while over one million are in dire need of humanitarian aid. Although several peace efforts have already been conducted by different countries to unite all factions for durable peace and stability but in vain. In fact, the divergent interests of other countries in northern Africa and the lack of a unified approach for peace resulted in the consistent failure of peace processes. This piece of writing provides an analysis of the current Libyan crisis including the tensions between Egypt and Turkey. It maintains that war and conflict would bring only chaos and instability not only for Libya but also for the whole region. The durable peace and stability can only be achieved through political negotiations including all stakeholders. 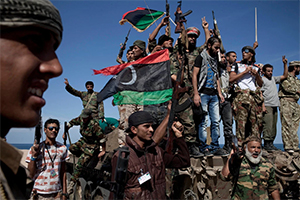 Arab Spring, via nytimes.com Libya, the badly fractured country, is engulfed in a complex civil war of myriad smaller militias since the uprisings of Arab Spring and subsequent fall of long-standing Muammar Gaddafi’s regime in 2011. When the Libyan state took action against the widening pro-democracy protests of Arab Spring in 2011, the United States of America, United Kingdom, France and NATO (Operation Unified Protector) carried out coordinated airstrikes and attacks with a clear anti-Gaddafi approach to secure their interests. Resultantly, Gaddafi was removed from power and later killed by the protestors. Owing to lack of democratic transition plan, the country was fragmented into various militias and factions on the political, ethnic and tribal lines to fill the power vacuum thereby leading towards chronic civil war. At present, Libya has become a politico-military quagmire for several powers that are struggling to fulfil their national interests. 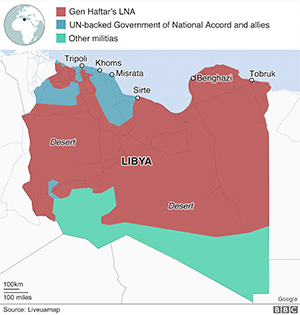 Libyan Political Division, via bbc.com Currently, the Libyan political map is mainly divided into two factions: Khalifa Haftar’s Libyan National Army (LNA) and UN-recognized Government of the National Accord (GNA). These both groups are widely supported by several foreign powers. Owing to converging interests, Egypt, the UAE, Saudi Arabia, France and Russia have been supporting Gen. Haftar’s LNA both economically and militarily. While the GNA is mainly supported by Turkey, Italy and Qatar. The LNA of Gen. Haftar is controlling the territory from the eastern Cyrenaica and Sirte to major parts of western Tripolitania including the large part of southern Fezzan region. While the GNA controls the capital, Tripoli, Zintan to the west and Misrata along the Mediterranean coast. Moreover, the GNA led by the Prime Minister Fayez Al-Serraj is controlling the two central financial institutions of Libya: The Central Bank and the National Oil Corporation (which controls the Libyan Petroleum Industry).

The eastern strongman of Libya, Khalifa Haftar, launched an offensive to seize Tripoli, the capital of Libya, 14 months ago in April 2019. After some gains for the Haftar’s LNA, his offensive was thwarted by the GNA forces with the support of Turkey. Earlier this month, the Libyan forces allied with the GNA gained an upper hand in the Libyan civil war when they retook the capital’s airport and other major key entrance and exit routes of the city. The aerial drones of Turkish air support turned the tide on the ground. Resultantly, Gen. Haftar had to retreat his forces from Tripoli’s boundaries. Although the commanders of the LNA painted the withdrawal as a tactical move by Haftar to give a chance to UN-backed peace process, Turkey has categorically rejected such claims. The Turkish foreign minister, Mevlut Cavusoglu, said that as Haftar’s LNA has long been ignoring calls for a peaceful solution to the conflict, now, they have lost all options of peaceful negotiations. Turkey believes that it is nearly impossible for Haftar to win the war even with the support of Egypt and the UAE. 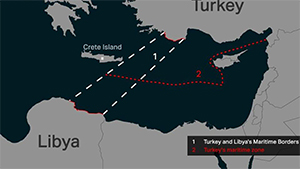 Turkey-Libya maritime deal, via trtworld.com Recently, the Libyan fighters, allied with the GNA, advanced towards the strategically important port city of Sirte that is a gateway to important oil terminals. A few months ago, the maritime delimitation agreement between Turkey and UN-backed GNA in November 2019 was another important development. This deal, despite objections from Egypt, Cyprus and Greece, gave access to Turkey to an exclusive economic zone across the Mediterranean Sea. Now, the President of Egypt, Abdel Fattah el-Sissi, while inspecting the military units at Sidi Barrani airbase, warned that any effort to capture Sirte or the inland Jufra airbase would be considered as crossing the ‘red line’ for Egypt. The strategic location of Sirte is extremely important in this whole episode. The city of Sirte can provide ample opportunities to the Libyan fighters to control the oil installations, terminals and oil fields in the further eastward. These installations were shut down by the tribes aligned with the Haftar’s LNA thereby cutting off Libya’s major source of income. El-Sissi also offered Egyptian arms and military training to the Libyan tribes to defend their country. While the GNA categorically denounced the warning by el-Sissi and declared it ‘a hostile act’ and ‘declaration of war’. Egypt’s El-Sissi claimed that his action would have ‘international legitimacy’ as it would be in self-defence against ‘threats from terrorists and mercenaries’.

The experts are saying that El-Sissi’s statement is for deterrence only. Indubitably, Egypt is already doing its best to support Gen. Haftar. Moreover, Egypt is not stable enough internally to intervene militarily into any other country. Abdel Fattah El-Sissi, who took power in a military coup in 2013 from the Muslim Brotherhood, is losing support at home. Although Egypt is being considered a heavyweight player in the Middle Eastern politics because of its strategic location, large population and glorious history, a few latest strategic moves by El-Sissi have put Egypt in a vulnerable position. Firstly, El-Sissi has transferred the two strategically important sovereign islands of Egypt, Tiran and Sanafir, to Saudi Arabia in exchange for Saudi financial support for his government. Secondly, the government of El-Sissi, despite declaring the construction of the Grand Ethiopian Renaissance Dam by Ethiopia on the river Nile as ‘red line’, is too weak to take any action against Ethiopian move. Ethiopia has started the construction of the dam which will adversely impact the Egyptian economy in future. Thirdly, Egypt aims to achieve very little in its maritime deal with Greek Cypriot. However, if Egypt agrees with the principles of Turkey and Libya, it can achieve much more. Lastly, the economic situation in Egypt is vulnerable. Keeping in view the aforementioned issues, it can be argued that Egypt may not be willing to intervene in Libya and these statements could be a deterrence tool against Ankara-backed forces of GNA. However, there are chances that other foreign actors might support and push Egypt for this move. Similarly, Turkey is already engaged on multiple internal and external fronts such as political support at home and military operation in Syria. It would not be in favour of Turkey to start another war-front. However, if Egypt intervenes into Libya to support Gen. Haftar’s forces, the war between Turkey and Egypt, including several other allies, would become inevitable thereby leading towards regional chaos and instability. In case of a conflict between Turkey and Egypt, Libya would become another Syria. 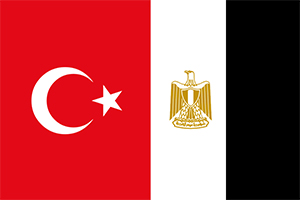 Turkey-Egypt Flags, via timep.org A secure and stable Libya would provide both Turkey and Egypt vast economic opportunities whereas military confrontation would adversely affect their interests. At present, Egypt is the largest trading partner of Turkey in Africa. Interestingly, the Libya-Turkey maritime agreement provides Egypt with an opportunity to expand its Exclusive Economic Zone that can be as big as the territory of Serbia and 25 times more than the size of Cairo. Similarly, Turkey has not only to understand the regional socio-political dynamics but also take rational decisions accordingly. Turkey has to properly convey the Egyptian leadership that it has no plans to shape the domestic politics of Egypt. Similarly, Egypt has to understand that Turkey has become a stakeholder of Libyan Crisis and it is likely to play an important supporting role in the future political landscape of Libya with the GNA.

It is a high time for both countries to compartmentalize their relations and carve areas that can not only serve their mutual interest but also be in favour of regional peace and stability. As both Egypt and Turkey are Muslims countries, their social and cultural dynamics would be in the favour of mutual cooperation rather than conflict. Moreover, organizations such as OIC and Arab League should play their constructive role to bring not only these two countries but also other stakeholders on the negotiating table. Furthermore, regional peace and stability in the Middle East can only be achieved through regional cooperation and efforts. Unity of Muslim countries in the region can not only alter the fate and future of the region but also of the Muslim Ummah at large.